O.K. Every possible scenario has been evaluated and had its Impact/Probability score assigned. Now it’s time to assign it a spot on a grid. Plot out all the events, using their corresponding numbers in the worksheet as the marker on the grid. The vertical scale shows the Impact Value (0 to 10) and the horizontal scale represents the Probability (0 to 100%). 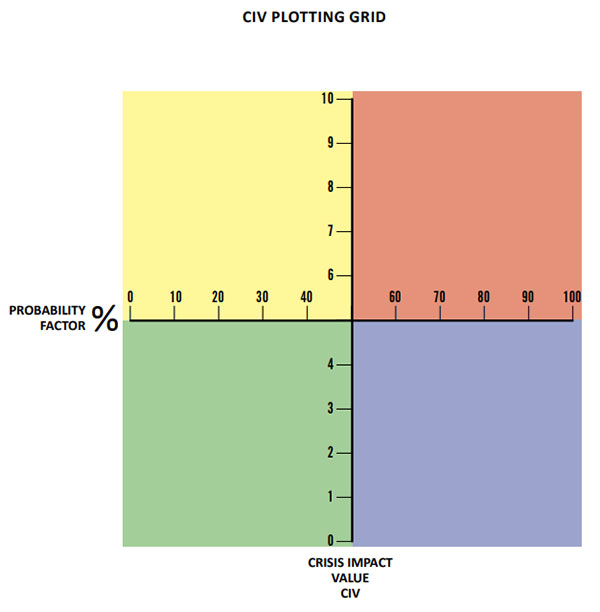 Plot all your events according to the crisis impact data (Impact/Probability) on the grid and when you’re all done, it should look something like this: 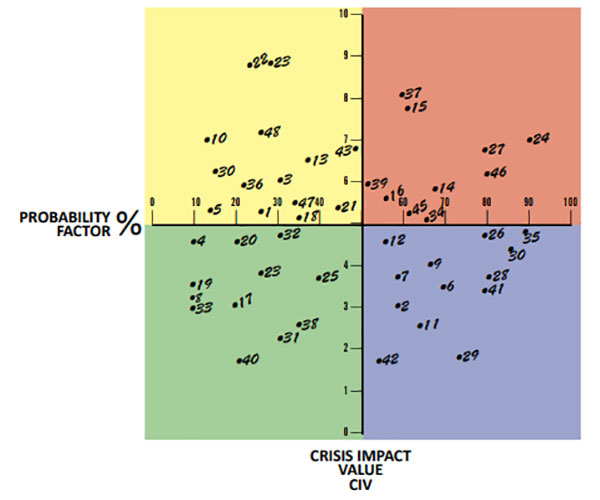 Now that you have them all plotted, you can rank them from the event that has the highest Impact and highest Probability (those in the Red Range) to scenarios that rank low in Impact and low in Probability (the Green Range).

Remember, you want to focus on events in the Red Range first, then the Yellow. If you whip through those and feel comfortable, tackle the Blues.

Based on our sample plotting, here are the Red Range events that require near-term attention:

Your goal is to reduce the Impact or the Probability of each scored event so that you can move these them into the Blue or Green Range.

Let’s look at data failure for starters. How would you reduce the Impact or Probability of a data failure?

To reduce the Probability, you could make sure all your data is backed up regularly. This would move the crisis to the Yellow Range because it would be less likely that data would be lost if there were a hardware failure. That’s a good start, but you’re still going to have to address the Yellow Range threats somewhere down the road. It would be far wiser to move them straight to Blue or Green.  For example, you can choose to back up the data on a schedule and store a backup of it off-site somewhere or put in in the cloud. No matter what the crisis, you’ll always have a backed up copy of your important data.

Layoffs or reorganizations are part of the business cycle. They can even be considered inevitable. While you may not be able to execute a no-layoff policy to reduce the Probability, you can reduce the Impact by devising an internal communication plan that keeps employees informed, handles staff reductions or reorganizations with honesty, integrity and transparency, and creates a system for reducing staff with dignity.