What You’ll Learn: The old adage that “it takes money to make money” is as true today as it was when JP Morgan was building his empire.  Whether its startup capital to get your idea off the ground or bridge funding to get you through slow times, money can be a make or break proposition for any business. We’ll walk you through some of the options and help point you in the right direction. 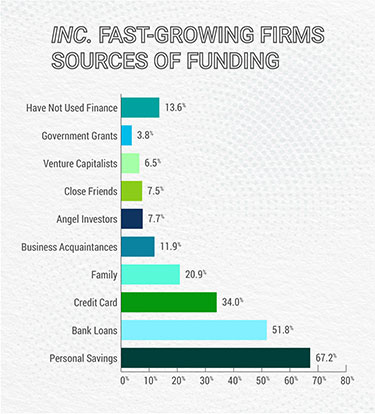 There was a time when a businessperson could simply walk into their local bank and walk out with a small business loan.

But banking as a whole has changed over the last few decades. Large national and international banks have become commonplace in communities across the state, displacing smaller community banks.

By nature, these large banks are more risk-averse than a smaller bank where you were a customer and neighbor. Big banks typically don’t handle loans under $50,000, and many small businesses don’t need that much money or more important, don’t want to carry that much debt.

Since the banking industry isn’t going to change any time soon, the only choice for small businesses and entrepreneurs is to seek alternate sources of financing.

There are many ways to get funding for your new endeavor. Some are pretty straightforward; many more are very out of the box. We’ve outlined them all in our book, Startup Wisdom, 27 Strategies for Raising Business Capital.

Here are just a few of the strategies outlined in Startup Wisdom:

Dip into your own pocket

Most businesses start this way. Over time, an entrepreneur has saved some money and uses it to finance a new enterprise. Some so-called “experts” will tell you to use other people’s money whenever possible. Great idea! On the surface. Using money from someone else may mean that you’ll incur near-term debt that works against your cash flow projections. Going deep in debt and facing an impossible repayment schedule will put you in a defensive posture right from the start. This negative cash position will compromise your ability to make critical decisions because you’re always worried about how much money you owe instead of focusing on how much money you should and could be making if you had the luxury of taking measured risks.

In action: GoPro, Inc. founder Nick Woodman was disappointed in the cameras that were available to capture photos of him surfing in Australia. Deciding to make an all-in-one camera, Nick raised $10,000 selling beads and shells out of the back of his van, moved back with his parents and took odd jobs to pay for the design of his new idea. At the end of 2004, GoPro had $150,000 in revenue. In 2019, sales were $1.2 billion.

The family and friends plan

Family and friends are another potential source, and they are often more than willing to kick in some dollars for an idea that shows promise. Just remember that owing relatives and friends can be costly in more ways than one. If your business goes south, your friendships and relationships can become severely strained. Even if there are supposedly no strings attached, there may be unspoken strings. That said, you can treat this like any other funding strategy. You can make your pitch irresistible and ask your family and friends to become investors. For a piece of the action (equity, a balloon payment down the road or a percentage) or other return on their investment, they can help you fund your dream. This is where many make lighter work. If you need $12,000 and have a dozen friends and family members, that’s $1,000 a pop. If you have two dozen in your network, it’s only $500 a pop. If you opt to go this route, make sure the pitch is about your business idea and not you. Never make it personal as it may come back to haunt you..

While banks have more restrictive lending policies, credit unions may be an option if you need a small business loan. Credit unions are there for their customers, who are also members and shareholders. They typically serve a specific audience, such as employees of a large company or a particular community or a demographic, such as a branch of the military. You’ll want to do some research to find out which credit union would be best for you in terms of loan products and rates. Of course, you’ll also need to become a member and open an account.

If you are seeking a personal or secured loan, whether it’s through your bank or a credit union, pay close attention to the 5 Cs of Credit: Capital/Cash, Capacity/Cash Flow, Collateral, Character and Conditions. Many loan programs want you to kick in 25 to 30% of the total amount you are requesting and want to see proof that you will be successful from the standpoint of cash flow and business acumen. You may also need to put up some collateral. This is where a business plan comes in handy.

In action: A Wenatchee photographer’s equipment had become outdated since the world has gone digital, and his equipment was all film. To find financing, he decided to open an account at his local credit union. His credit wasn’t the best, but because he is a member, they offered him a secured credit card so he could raise his credit score. Six months later, he got a small loan and paid it back. With his credit score improving because of these loans, his loan officer connected him to a Small Business Administration loan for $10,000, so he could buy new equipment to grow his business.

Crowdfunding as a strategy

There have been amazing success stories and some colossal failures. Remember the Coolest Cooler? It took in a cool $13 million, but because of the inexperience of its management team and an inability to source reliable suppliers, the company never delivered all the high-tech coolers it promised to Kickstarter investors and ended up going out of business. If you’re going to go the crowdfunding route, have an idea that you can actually execute and be sure you have a large social media pool to draw investors from. You need to really nail your marketing, promotion and fulfillment to make it all work, especially since your funding window is limited and if you don’t reach your goal, it all goes back to the people who believed in you.

In action: Internet cartoonist Matthew Inman wanted to create a card game for kids seven and older so he started a Kickstarter campaign. Exploding Kittens became one of the most quickly funded campaigns on the site, bringing in $8,782,571. Exploding Kittens has raked in more than $50 million since.

Before you seek investors or private lenders, make sure you research the applicable securities laws. The investing space is tightly regulated, and you don’t want to become embroiled in a regulatory nightmare. That said, many entrepreneurs have had great success with attracting investors and using their capital to build successful businesses.

Venture capitalists rarely invest in startups, as it is too risky for their investment model. Angel investors, on the other hand, love to provide money to innovative startups and are willing to accept the risk. Angels use their own money to fund ventures, and with the investment, you may also end up with a mentor. Angels can bring more money to the table and offer more flexibility than other borrowing strategies.

Angels fund businesses in a couple of different ways. They may issue a promissory note, deferring interest payments for a year or two and converting debt into equity at specific milestones. Another funding strategy is a convertible preferred stock position so the company can defer payment of fixed cash dividends for four or eight fiscal quarters. This does mean that you will need to make performance benchmarks that were agreed to as part of the deal. Finally, the angel may want a voting equity position, which means they will be involved in company management and bring in assistance for specific operations, such as marketing, operations or distribution.

Before you approach an angel or a venture capitalist, do your homework. Find out what types of products, services or industries they invest in and the process they use. You want to be both strategic and tactical in your approach. This is a long-term relationship, not a short-term sale, and if you are viewed as a pest, you’ll never get your foot in the door again.

In action: Apple Computers was not even a year old and had sold just a couple of hundred computers when Mike Markkula arrived on the scene in 1977. He told Steve Jobs and Steve Wozniak that he was willing to invest $250,000 in the new company in exchange for a third ownership in Apple. Mike not only brought money to the company but experience and connections. These connections helped Apple get the venture capital it eventually needed to grow into the multi-billion dollar company it is today. Without Mike, there never may have been a Macintosh or an iPhone.

As you formulate a social purpose that is aligned with your own values and passions, extend it to what a team would look like.

It’s easy to give money once to a smaller cause. Any business can do that. But this will be your continual focus; it will inform your culture, shape your operations, and over time, become the lasting legacy of your business.

Think about Patagonia’s workforce. They come in all shapes and sizes and are interested in a range of outdoor pursuits, from flyfishing and mountain climbing to surfing. But they are all bonded with the same purpose – good stewardship of the environment – creating a motivated, almost fanatical workforce that is committed to the company, its customers and its reason for existing. Everyone, from the CEO to the mailroom clerk, is part of the salesforce.

One of the lesser-known strategies entrepreneurs use to build and stretch available capital is to barter and trade. Use your network of contacts, skills and expertise as negotiating tools to get the resources, equipment and supplies you need to build your business. When you start out, every dollar counts so you want to try to hold onto as much real capital as possible to fund activities that can’t be traded or bartered. As you use this strategy, remember to make your offer solve a problem the other person has and not about what you need in return. Giving away something for seemingly nothing can get you a huge return on your investment if you can deliver on your promises. It can also open doors to other opportunities within the recipient’s network of contacts.